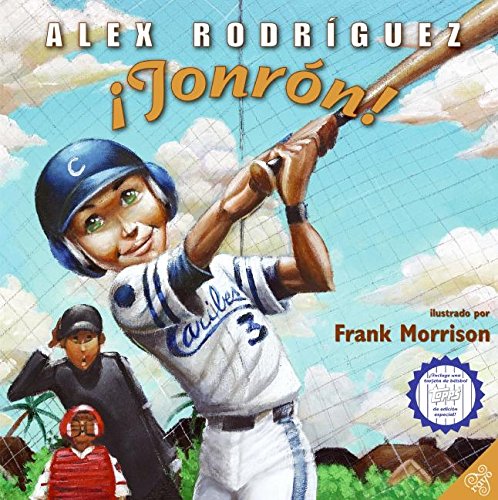 Out of the Ballpark

New York Yankees third baseman Rodriguez dips into his childhood to field this buoyant tale of a ballplayer with an obvious passion for the game. Though young Alex desperately hopes to play well during the playoff game and make his family proud, the boy repeatedly botches plays ("I think I'm setting a record for errors and strikeouts in the same game"). Yet his team wins and progresses to the championships. The next morning, Alex wakes at dawn to practice (in an extraneous, odd scene, he and a teammate run past their teacher, who is holding her nose, and Alex says to his pal, "If we stink now, wait till after practice this afternoon"). Rodriguez sets up an expected but still satisfying climax: in the bottom of the last inning of the championship game, Alex bats with the bases loaded and, with two strikes, hits a grand slam to win the team's first championship. Morrison's ( ) stylized paintings capture the story's energy and his playfully skewed perspectives keep things light. In a concluding note, Rodriguez shares his "recipe for success," which entails working hard on and off the field, staying away from drugs and showing respect for others. Baseball-loving kids will appreciate the message that even future MVPs can have an off day, and young Yankee fans will especially appreciate the photos of Rodriguez's boyhood plus a Topps baseball card with a photo of the young ballplayer (attached to the back endpapers). Ages 4-8.