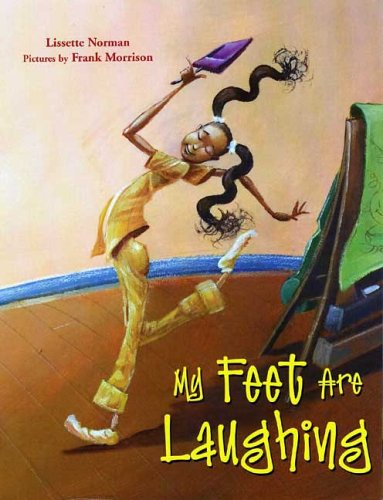 My Feet Are Laughing

An eight-year-old girl narrates 16 poems that are infectious in their toe-tapping, life-loving spirit. Sadie, an aspiring writer, lives with her mother and younger sister in Harlem. In the selection, "The Coolest Job in the World," she calls herself a "poetry girl" who will "paint pictures with words." Norman, whose parents, like her heroine's, hail from the Dominican Republic, has done just that with her first children's book. "I'm a hip-hop song that makes you wiggle./ I'm a late-night sneaky giggle," Sadie imagines in the selection "Daydreaming." While sometimes lengthy, each of the reflective poems contains observations both lyrical and childlike. Sadie's everyday subjects range from wavy hair ("If you comb it straight and pull it tight,/ I'm afraid my hair can't sing") to her favorite things ("I love it when Pop calls me silly names/ like hula-hoop head and pumpkin bread") to her parents' separation. Morrison paints the characters in the same long-limbed, high-stepping style he used for . His snappy illustrations, drenched in purples and golden browns, dance in their own right as they bring Sadie's multicultural world to light. Door frames, fences and floor moldings curve and swerve, reflecting and extending the playful tone of the text. Readers may find their feet laughing right along with Sadie's. Ages 4-8.