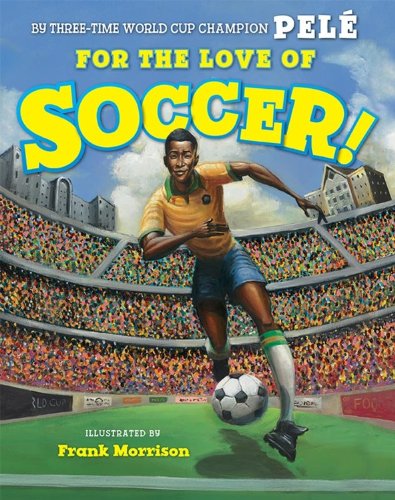 For the Love of Soccer!

In a spare narrative enlivened by typography of various sizes and colors, soccer legend Pelé underscores his lifelong passion for soccer, starting in childhood when “I would play with anyone, anytime, anywhere!” As the book moves forward in time, he describes the excitement of playing on a professional team: “The second the starting whistle blasted, every player exploded into action.” Following two time lines simultaneously, Morrison's ( ) energetic, fluid paintings spotlight Pelé's soccer moves beside those of a young player today, always appearing on the right side of each spread, whose speed and resolve similarly spring from the page. In the scenes featuring Pelé, the athlete is the sole focus, painted in bright colors against a sepia backdrop. The present-day scenarios are played out against a vibrant urban setting that reveals family members cheering on the players. Though the narrative links the two players throughout, a warmhearted ending ties their stories together visually, as Pelé signs a ball for the boy on the field of a packed stadium. A biographical sketch of Pelé provides a final kick. Ages 3–7.