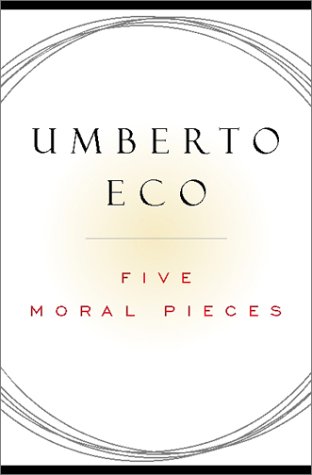 Most famous for his complex, erudite novels, semiotician and literary theorist Eco (, etc.) devotes these occasional essays primarily to the quest for tolerance in an intolerant world and to the intellectual responsibility of individuals to confront difficult moral problems directly. Eco observes, for example, that war contradicts "the very reasons for which it is waged" in a world where telecommunications technology and constant migration render traditional rationalizations for war (e.g., the defense of borders) obsolete. In the end, he argues, war cannot be defended, for, in addition to its manifold evils, it is a wasteful enterprise, squandering lives and resources. In another essay, Eco contends that ethical principles can indeed be articulated apart from any grounding in religious faith, though a natural ethic and a religious ethic may share common ground. Examining the reporting techniques of several Italian newspapers, he asserts that they share a moral responsibility to inform rather than to titillate with gossip and advertising. In the collection's most eloquent essay, Eco sketches the universal elements of fascism (such as "the cult of tradition" and a "suspicion of intellectual life"), emphasizing that such elements persist even today and can appear in the most innocent guises. Finally, he reveals the complex bond linking migration, with the resulting impact of one culture on another, and intolerance, concluding that the only solution is to teach tolerance from birth. Eco's fans will enjoy his perspective on these issues, but aside from his worthy reflections on fascism, these pieces neither ask new questions nor reach startling conclusions; some are even quite simplistic (e.g., "War is a waste").