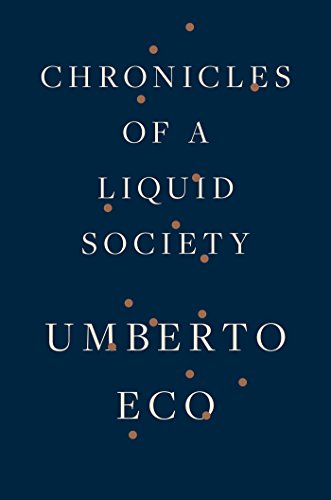 Chronicles of a Liquid Society

This posthumous collection of essays reprints spirited selections from a column, “La bustina di Minerva,” that the late novelist Eco (Numero Zero) wrote for the Italian weekly magazine L’Espresso. These “brief jottings,” which span the years 2000–2015, cover a range of topics, including education, technology, racism, and religion, and add up to a picture of a society in flux. Eco’s writing reveals a humanist in every sense of the word, well acquainted with the classics of Western civilization and able to take a broad, often amused view of human affairs. Neither a snob nor a prude, Eco takes as his central theme the value of knowledge, along with the process of identifying, acquiring, preserving, and transmitting it. His conclusions are grounded in moral principles such as tolerance and good old-fashioned courtesy, and the only enemies he identifies are the enemies of knowledge: ignorance, credulity, violence, and fear. Dixon’s translation is seamless, capturing Eco’s erudite style (and keeping the occasional sprinkle of Latin.) This volume’s primary reward lies in the pleasure of watching a finely calibrated, expansive, and logical mind build an argument or deconstruct cant. Eco has left us an intelligent, intriguing, and often hilariously incisive set of observations on contemporary follies and changing mores. (Nov.)
close
Details