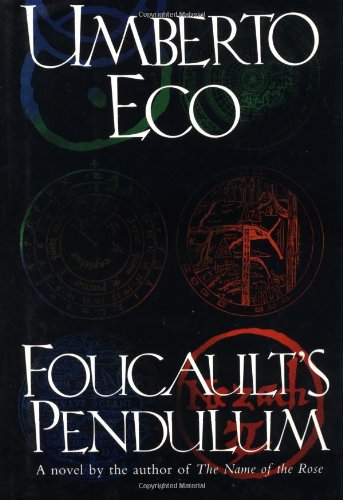 If a copy (often unread) of The Name of the Rose on the coffee table was a badge of intellectual superiority in 1983, Eco's second novel--also an intellectual blockbuster--should prove more accessible. This complex psychological thriller chronicles the development of a literary joke that plunges its perpetrators into deadly peril. The narrator, Casaubon, an expert on the medieval Knights Templars, and two editors working in a branch of a vanity press publishing house in Milan, are told about a purported coded message revealing a secret plan set in motion by the Knights Templars centuries ago when the society was forced underground. As a lark, the three decide to invent a history of the occult tying a variety of phenomena to the mysterious machinations of the Order. Feeding their inspirations into a computer, they become obsessed with their story, dreaming up links between the Templars and just about every occult manifestation throughout history, and predicting that culmination of the Templars' scheme to take over the world is close at hand. The plan becomes real to them--and eventually to the mysterious They, who want the information the trio has ``discovered.'' Dense, packed with meaning, often startlingly provocative, the novel is a mixture of metaphysical meditation, detective story, computer handbook, introduction to physics and philosophy, historical survey, mathematical puzzle, compendium of religious and cultural mythology, guide to the Torah (Hebrew, rather than Latin contributes to the puzzle here, but is restricted mainly to chapter headings), reference manual to the occult, the hermetic mysteries, the Rosicrucians, the Jesuits, the Freemasons-- ad infinitum . The narrative eventually becomes heavy with the accumulated weight of data and supposition, and overwrought with implication, and its climax may leave readers underwhelmed. Until that point, however, this is an intriguing cerebral exercise in which Eco slyly suggests that intellectual arrogance can come to no good end. (Oct.)
close
Details