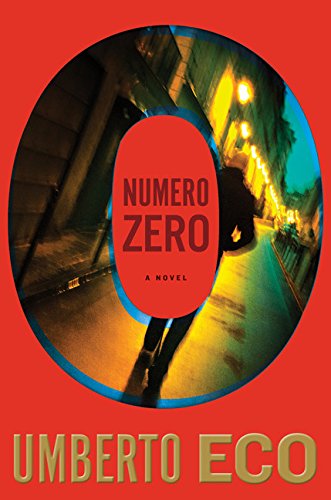 At the heart of Eco’s short, satiric novel beats a rant against contemporary journalism and the suspicion-rich, fact-poor culture it nurtures. In 1992, Colonna—a 50ish university dropout who ekes out a living as a hack journalist/manuscript reviewer/proofreader/fact-checker—is hired by Milan editor Simei to help produce sample issues of a proposed (mock) newspaper underwritten by an ambitious hotel and nursing home magnate for his private use. Colonna’s new job includes ghostwriting Simei’s book about the newspaper experiment, for his own purposes. At editorial meetings, the newspaper’s six reporters are taught such journalistic techniques as dumbing down, grouping stories to suggest worrisome themes, responding to complaints by casting aspersions on the complainer, quoting sources real and imaginary, and slanting news while maintaining an objective posture. As the newspaper takes shape, Colonna becomes romantically involved with Maia, the horoscope writer, and befriends Bragadaccio. Formerly a magazine freelancer for What They Don’t Tell Us, Bragadaccio is obsessed with the idea that Mussolini is alive, well, and living in Argentina, with the coverup connecting the CIA, a right-wing/Catholic conspiracy, and sundry government scandals. For Eco (The Prague Cemetery), 20th-century history is a mud river beneath Italian society, creating sinkholes for truth and principle. Historical fiction still inspires his best writing, but while romance and humor have never been his forte, they are both credible here. Unfortunately, the promise of a psychological/political thriller remains unfulfilled. As fact and fiction merge into mystery, Eco offers fewer clues than in his masterwork, The Name of the Rose, but no William of Baskerville to solve the puzzle. (Nov.)
close
Details