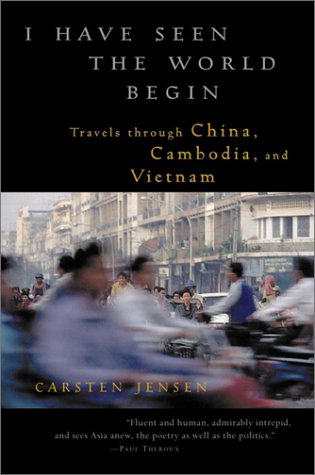 I HAVE SEEN THE WORLD BEGIN: Travels Through China, Cambodia, and Vietnam

That Danish journalist and essayist Jensen witnessed something momentous and formative on his journey through southeast Asia is clear, but the declarative force of his title belies the gradual, continuous nature of his discovery. Where and when did the beginning of the world make itself visible to this lonely traveler? On Nanjing Dong Lu, where brash consumerism explodes in pyrotechnics on the eve of the New Year, prompting Jensen to exclaim, "China is shedding its skin"? Or was it in Udang, the former capital of a kingdom now known as Cambodia, where amid the rubble of a wasted monastery he finds a grove of trees, carefully tended and labeled with Latin species names? Or in Vietnam, where erotic women have forgiven their past sorrows and whose "process of forgetting... was the sandpaper with which they refined an outlook on life"? In all these places and others, Jensen describes a near mystical experience in language so luminous one wonders whether to praise the author or the translator. Often, the headiness of his reactions threatens to discredit him—he confesses that for him Asia represents a "dream." A very Western political view also compromises his analogies—he views modern China almost exclusively through the lens of Tiananmen Square; Cambodians are uniformly asked about life before 1979, during the period of Pol Pot's nightmarish "geno-suicide"; and he thinks of Vietnam and war as inseparable, "as though that were the country's name." Still, Jensen's solemnity and spirituality distinguish him from most Western observers, as does his easy turn of anecdote into metaphor.