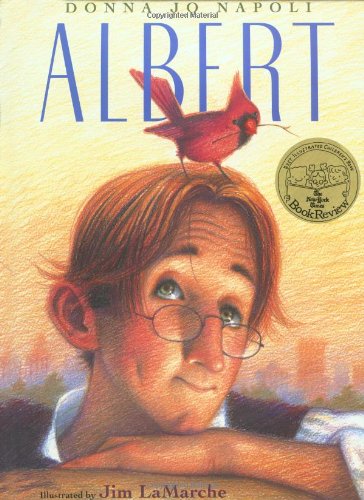 Napoli's () first picture book spins a beguiling tale of a recluse forced out of his shell through unlikely circumstances. Sticking his hand through the window grillwork each day to check the weather, Albert invariably decides it's "too cold," "too damp" or "too breezy" to venture out. Instead of going for a walk he "listened to baseball games on the radio and cut pictures out of magazines and wrote postcards he never mailed." One day when he stretches his hand outside his window, a pair of cardinals build a nest in it. Reluctant to destroy the nest, Albert sleeps standing up and guards the eggs while the parents are foraging. He thus discovers that the world is not so forbidding, and decides it's time to test his own wings. Napoli effortlessly incorporates the twin metaphors of Albert reaching out to the world around him and baby birds learning to fly in flawless prose. LaMarche () luminescent colored pencil illustrations in turn reflect the tale's quiet charm. The artist is in complete control of his imagery from start to finish: A literal foreshadowing in the opening scene shows the shadow of the birds perched on grillwork crossbars projected onto the wall, symbolizing both imprisonment and freedom; in the final scene, Albert "flies" on a swing in a city park. The artist captures Albert's gentle eccentricity in his Edwardian haircut and oddly formal clothing. A magical marriage of art and text. Ages 5-8.