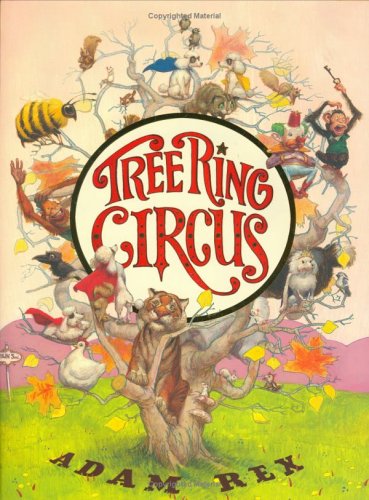 Marvelous hand-lettering and meticulous oil paintings hearken to 19th-century Barnum ads—or 1960s counterculture poster art—in Rex's offbeat ( ) tale. The punny "tree-ring" circus of the title is not a big top, however, but a "fast-growing," nearly leafless tree and its unlikely inhabitants: "A chicken./ Two blue jays, three squirrels, a clown,/ a cat who climbed up but can't find her way down,/ three chipmunks, two sparrows,/ a whopping big bee,/ five mice and a raven/ all live in the tree." When 12 more animals (two tigers, one ostrich, etc.) escape from a traveling circus and perch on the thick, twisty branches, the tree is full, and ambitious readers can count the participants as listed in the cumulative text. At this moment, the 13th escapee—an elephant—appears, and the caption reads simply, "Drumroll, please," as the pachyderm makes its ascent. When the boughs break, the occupants tumble to the grass below "and flee from the lea/ where the tree used to be." Dr. Seuss fans, primed by the rhyme, may recall , who allowed a whole menagerie to reside in his antlers. Rex creates an absurd counting scenario, but there's no explanation for the tree's popularity—the animals aren't talking. Instead of a plot, this book's strengths are its jazzy, oversize display type and the dainty oil renderings of the tree-climbers, who fairly pop off flattened backdrops of pastel yellow, baby blue and pale mint green. Ages 3-7.