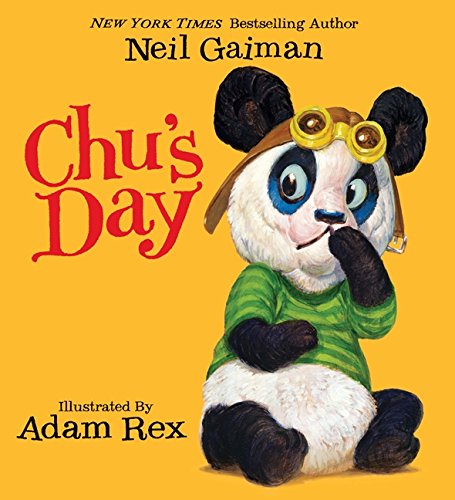 No wolves in the walls or button-eyed parents in this story about a baby panda named Chu. Yet Gaiman builds suspense from the enigmatic opening sentence (“When Chu sneezed, bad things happened”), which frames a portrait of the roly-poly protagonist, decked out in a striped T-shirt, aviator cap, and goggles. Gaiman maximizes anxiety by having Chu visit a tranquil library (“There was old-book-dust in the air”) and a crowded diner (“There was a lot of pepper in the air”). Twice, Chu’s anxious parents ask, “Are you going to sneeze?” and itchy-nosed Chu—snapping his goggles over his eyes in preparation—does not follow through. That evening, under a big top whose performing animals echo the menagerie in Rex’s Tree Ring Circus, Chu cannot resist, and his true power is revealed. Gaiman’s comic timing gets a boost from strategic book design and from Rex’s hyperreal paintings, which emphasize Chu’s round, fuzzy form and apparent harmlessness. Gaiman and Rex deliver a classic one-two-three punch, making hay from the notion that a cuddly baby panda is not to be trusted. Ages 4–8. Agent: Merrilee Heifetz, Writers House. Illustrator’s agent: Steven Malk, Writers House. (Jan.)
close
Details