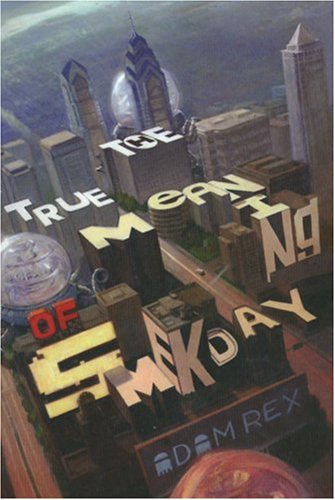 The True Meaning of Smekday

Who knew the end of the world could be so hilarious? With a misfit cast of characters led by a precocious 11-year-old narrator named Gratuity “Tip” Tucci and a bumbling alien named J.Lo who has an appetite for dental floss and air fresheners, Rex's high-octane fantasy could fairly be called an apocalyptic comedy. After the Boov (technologically advanced aliens) conquer Earth (or Smekland, as they call it, after its discoverer), they decide that humans must live on preserves; all Americans must move to Florida. Tip, driving her mother's car with her cat Pig for a passenger, meets the unexpectedly helpful Boov J.Lo, who, she later discovers, has bungled a mission and is on the lam. Parallels between the Boov and European settlers and their treatment of Native Americans deepen the impact of the story, but the author goes well beyond delivering a single political message. Incorporating dozens of his weird and wonderful illustrations and fruitfully manipulating the narrative structure, Rex skewers any number of subjects, from Disney World to various fleeting fads. Some of the best jokes come from throwaways and from J.Lo's and Tip's attempts to understand each other (when Tip asks if his society has boys and girls, he says, “Of course. Do not to be ridicumulous,” and calmly lists the “seven magnificent genders” of the Boov). Picture book aficionados will already know Rex from and (reviewed Sept. 10); now another audience can savor his wit. Ages 8-up.