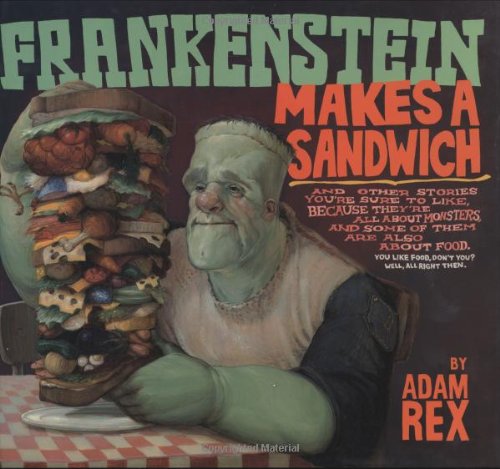 Lovers of silly pop-culture allusions will get a kick out of these monster spoofs. The title poem sets the parodic tone. Frankenstein's monster, pursued by torch-bearing villagers, feels sad to be despised: "They threw tomatoes,/ pigs, potatoes,/ loaves of moldy bread./ And then a thought struck Frankenstein/ as pickles struck his head." Instead of pitying himself, he thanks the mob and makes a Dagwood sandwich. In subsequent pages, Rex ( )—in a mocking spirit akin to Sendak et al.'s —parodies wolfmen and vampires. A recurring joke features an aggravated Phantom of the Opera who cannot compose music except to the tunes of "Pop Goes the Weasel" and other standards ("It's a small world after all./ Angry cursing fills the hall./ Now he's crawling up the wall./ It's a small, small world"); a goofy Dracula tale follows the bouncy meter of ' . Rex demonstrates a dizzying yet fitting variety of artistic styles, layouts and lettering. For instance, he styles a Jekyll and Hyde tale as a 19th-century illustrated newspaper, a photo collage imitates a Japanese monster flick, and a perfectly realized Richard Scarry bunny gazes sweetly at a yeti in a sendup of a Little Golden Book ("The Yeti Doesn't Appreciate Being Called Bigfoot"). Rex gives readers the pleasure of discovering punch lines on their own, and his droll, ultra-detailed paintings show he takes comedy seriously. Ages 5-10.