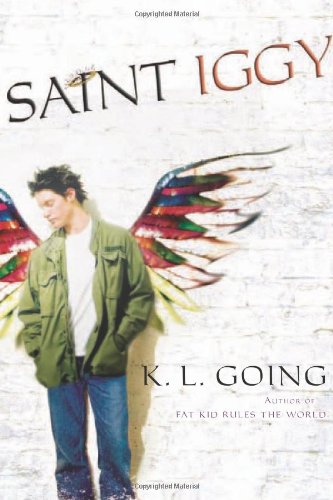 In her most impressive achievement yet, Going ( ) gets inside the mind of a teenager who has fallen between the cracks and, facing his options, knows he's "shit out of luck." Like the narrator of Chris Lynch's , 16-year-old Iggy Corso is an unreliable narrator whose account of events clashes with what readers know of how the world works. The brilliance of the novel is the way in which Iggy's perceptions call into question readers' own sense of society's structure and inner workings. Born of an addicted mother and living in New York City public housing with his parents (both addicts), Iggy knows that a high school education is his only means of escape. Yet he faces expulsion for "acting out" in class. He knows he needs to come up with a "How-to-Change-Everyone's-Mind-About-Me plan," so he can attend a hearing and get back into school. When Mo, his only friend, scores some drugs on credit from Freddie, the drug dealer whom Iggy blames for his parents' addiction, the author fluidly juxtaposes the two friends' realms. Mo, who is "renouncing" his Upper East Side life, heads home to get the money for the drugs from his mother and takes Iggy with him. Some humorous scenes of Iggy interacting with the Park Avenue crowd demonstrate what a fish out of water he is. Yet, when Mo believes that all can be fixed up with Freddie easily, their roles shift and Iggy reigns as the expert in the world of New York's underbelly. The adults here are just as well-drawn as the teens; a sympathetic principal, cop and priest, as well as Mo's mother, all help pave the way for Iggy's internal growth. The book delivers a powerful anti-drug story without being preachy, and in perhaps the book's greatest strength, the events remain painfully authentic to Iggy's circumstances. Readers will be rooting for Iggy as he performs his ultimate heroic deed. Ages 14-up.