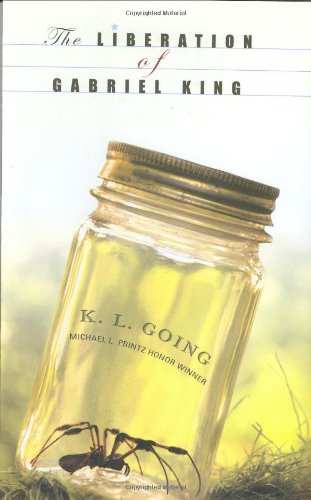 Gabe King, Going's ( ) sympathetic narrator, has a list of fears longer than he is tall (No. 29 is that he'll never get any taller). All manner of bugs make him antsy but his biggest worries, justifiably, are two sixth-grade bullies. He's so intent on keeping his distance he's willing to stay in fourth grade rather than move up to fifth, where he'll once again have to share a cafeteria and playground with bullies Duke and Frankie. Gabe's best friend, Frita, the only black kid in his class, has other ideas: she plans to spend the summer of 1976 "liberating" Gabe from the things that scare him (she gives him a spider for a pet and makes him try the rope swing over the catfish pond). In solidarity, Frita makes her own "fear list"; chillingly, the Ku Klux Klan takes the top spot, and, poignantly, the list includes "not having Gabe with me in the fifth grade." Full of humanity and humor, this well-paced novel offers a dollop of history with its setting in rural Georgia at the moment local boy Jimmy Carter's presidential bid is gaining momentum. The villains' credibility makes them scary, and both Gabe and Frita's refreshingly functional families are exquisitely drawn, especially Terrance, Frita's menacing older brother (No. 6 on Gabe's list). Although Gabe gets the title role, wise, brave Frita is clearly the star. Ages 10-up.