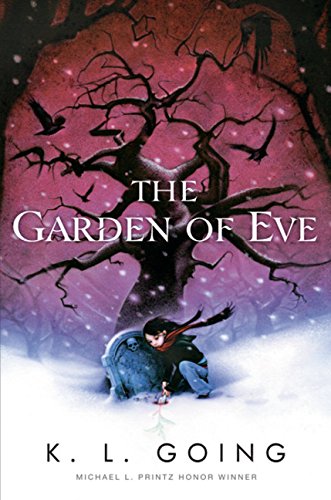 The Garden of Eve

Feeling bereft 10 months after her mother's death, 11-year-old Evie Adler is even sadder when her father uproots the two of them from Michigan and buys a dead apple orchard in Beaumont, N.Y. The town is colorless and cold and “there didn't seem to be any life at all. Even the crows had stopped flying overhead.” Evie's only playmate is Alex, the ghost of a 10-year-old boy whose death the town still mourns and who frequents the cemetery next door to the orchard. Her dad, meanwhile, has no luck in the orchard, which people claim is cursed. The former owner, a stranger, has bequeathed Evie a small seed, which his sister says might have been from the Garden of Eden, and might have played a part in the disappearance of another sibling. Evie plants the seed and hopes it will transport her to a magical garden where her mother will be waiting. What works best in Going's ( ) novel is the skillful depiction of Evie's grief for her mother and the wonderful life they shared. What complicates the story and makes it confusing is the odd combination of magic and religious symbols (for example, the ghost Alex turns out to be a twin brother named Adam; the seed instantaneously sprouts into a fruit-bearing tree). The emotional ending, with a surprising twist, ties the story together, but seems contrived. Ages 8-12.