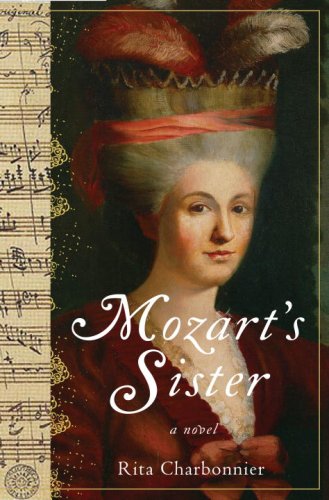 Maria Anna Mozart (1751–1829), nicknamed “Nannerl” by her brother Wolfgang Amadeus, was also known in her lifetime as a musical child prodigy, but was outshone by her younger brother. In this energetic debut, Italian TV scriptwriter Charbonnier fictionalizes Nannerl's life, beginning with her tender years in the household of ambitious and tyrannical patriarch Leopold Mozart. Depriving her of her beloved violin (“not an instrument for girls”), Leopold forces Nannerl into a supporting role for Wolfgang, which Charbonnier dramatizes with melodramatic verve. Nannerl's adult epistolary love affair inevitably gets tangled with Wolfgang and his career, though the two remain close throughout his short life. There's a blunt immediacy to the writing (carriage horses “t[ake] off with a whinny of euphoria”; characters exclaim “Holy Shit” at moments of crisis), and Charbonnier is more concerned with bursts of emotion than period detail throughout. Deep this isn't, but it does capture some of the electricity than ran through the family.