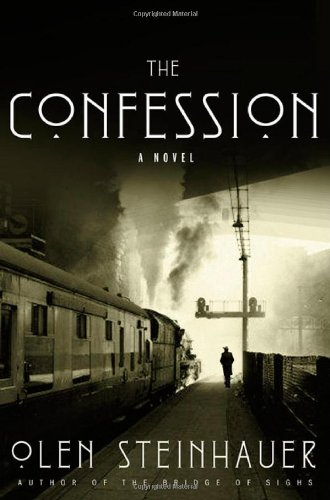 Steinhauer's original and mesmerizing first mystery, 2002's , was set in 1949, in an unnamed East European country. Now it's 1956, and the homicide detective who starred in that first book—the young, hopeful Emil Brod—has become a dour and pragmatic secondary character as the promise of the immediate postwar years fades. Steinhauer focuses instead on another police officer, the looming Ferenc Kolyeszar, a huge man who wears on each finger a ring with a grisly history. Ferenc is a talented novelist, though his sole published book so far exists only as a tattered paperback. But the confession of the title is in fact the subject of his next book—a jarring and pessimistic work about the fate of artists, indeed of all human beings, in the Soviet-haunted satellite countries, where work camps in the 1950s rival those of the Stalinist Soviet Union. Haunted by his wife's infidelities and driven perversely into his own, Ferenc falls afoul of a smiling KGB agent named Kaminski who has been assigned to his office. Investigating several past and present murders, Ferenc digs a hole for himself that is both believable and inevitable. Bigger in scope and slower-moving than , with deaths and deceptions snowballing grotesquely, the novel makes readers wonder just what Steinhauer will do for the next book in his series—and how far into the future it will take his team of citizen cops.