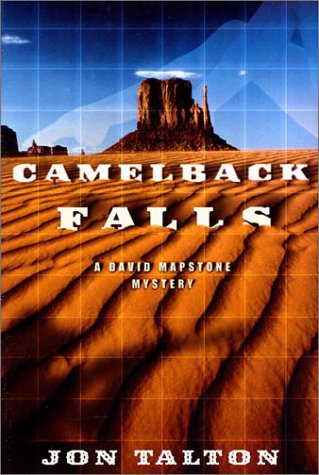 In this clever plot-twister, a bizarre series of actions transforms Deputy David Mapstone, who debuted in (2001), from mild-mannered historian of the Sheriff's Department of Maricopa County (Ariz.) into acting sheriff. Mapstone, who has returned to law enforcement after a 15-year academic detour, is only inches away when someone shoots his friend and mentor, Mike Peralta, at the reception following Peralta's swearing in as county sheriff. While Peralta lies in a coma, Mapstone takes over a department where he can rely on virtually no one except girlfriend Lindsey Adams, also a sheriff's deputy. An obscure reference to Camelback Falls and a chain of deadly events set Mapstone digging into a 20-year-old case he and Peralta had been involved in. Talton handles the difficult task of having his hero play simultaneous roles of acting sheriff and lone wolf without losing credibility. The Arizona setting (from the 1970s to the present) is faultless. Mapstone is dogged, though certainly not fearless, as he follows a long trail of drugs, sex and murder even as it threatens to expose those closest to him. Reflective and laid-back, Mapstone can play both departmental insider and outsider. His dual training as historian and law officer enables him to bring a fresh approach to the cases he tackles. Talton has mined another gem from the Southwest's trove of memorable sheriffs.