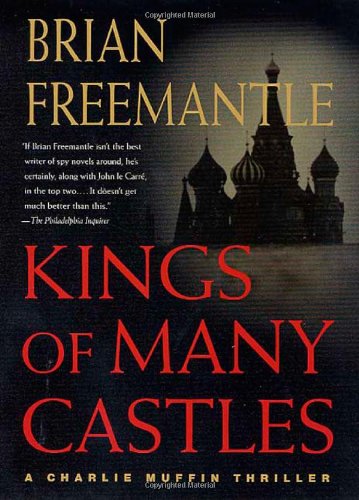 KINGS OF MANY CASTLES

Often compared with John le Carré, espionage veteran Freemantle brings back colorful MI6 operative Charles Muffin, the urbane, cerebral spy last spotted in . Charlie is assigned to the British embassy in Moscow and secretly reunited with his on-again, off-again lover, Natalia Fedova—a former KGB agent, now with the Interior Ministry—and their five-year-old daughter, Sasha. Not long after, the entire civilized world witnesses, on live satellite TV, a botched assassination attempt on both the Russian and American presidents in Moscow. The sniper mortally wounds the Russian leader, but the First Lady takes a bullet for the leader of the free world. Charlie, much to his chagrin, is called in to investigate when the gunman turns out to be the son of a British atomic physicist who defected to Russia nearly 30 years before. As he plumbs the murky secret files of the KGB, he's plagued by the bureaucratic ineptitude of the Americans and by veiled resistance from the Russians. Natalia tries to help, but Charlie can't quite bring himself to trust her. A power struggle in the Russian hierarchy and shady American campaign finances become the focus of the thin, unconvincing plot, which introduces too many colorless characters with forgettable names on both sides. Freemantle's witty, clipped style is a pleasure as always, and the scenes dealing with the assassination attempt are suspenseful, but those who stay the course will wonder if it was worth making the effort.