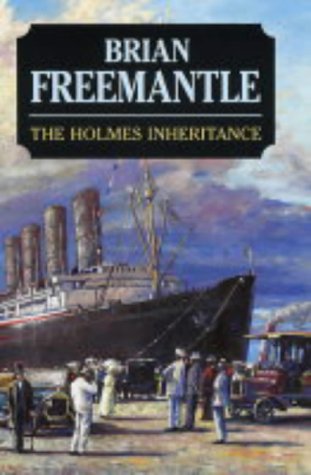 British veteran Freemantle ( , etc.) offers a Sherlock Holmes pastiche worthy of the best of Conan Doyle. Young Sebastian Holmes, estranged son of the great detective, sails to America on the , at the behest of guardian Uncle Mycroft, to investigate rumors of business magnates plotting secret weapons deals with the Germans just before WWI. Posing as a wealthy European investor, Sebastian travels in his American host's private rail car from the "dark Satanic mills" of Pittsburgh to Washington's embassy row, all the while sending reports in code based on Winchester school slang to his celebrated father back in England. Holmes himself, now enfeebled and dependent on the ever-loyal Watson and Mrs. Hudson, nervously monitors events across the Atlantic. Deft scene shifts take us from one intrigue to another as First Lord of the Admiralty Winston Churchill and rival politician Mycroft try to outmaneuver each other and use resentful Sebastian as a "performing monkey." Encountering arms dealers, shady middlemen and even a high society love interest, Sebastian nearly finds himself in over his head before he shows his true mettle in a dramatic finale on the docks of lower Manhattan. One hopes that this is but the first of many more Sebastian Holmes adventures to come.