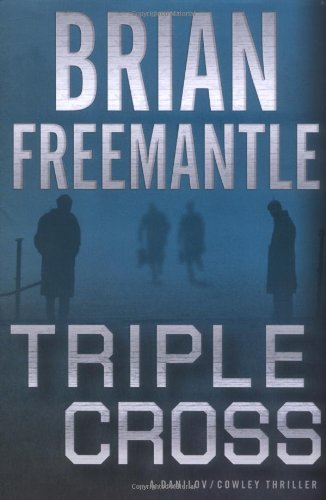 Taking a hiatus from MI6 operative Charlie Muffin ( , etc.), this gripping intrigue revisits the savvy teamwork of veteran FBI agent William Cowley (now heading the Russian desk in Washington) and his old cohort Dimitri Danilov (chief of Moscow's Organized Crime Bureau), last seen in , as they go up against an insanely homicidal Russian mafia kingpin who is determined to consolidate with the Italian and American Mafia families and eventually take over as (the boss of bosses) of a global consortium for organized crime. Igor Orlov—with the help of mistress Irena (wife of Igor's physician twin, Ivan)—tortures and mutilates the five leaders of rival families, floating their bodies down the river nailed to crosses in a lurid move to assume control of the Russian mob. Wasting no time, Igor flies to Rome and Chicago, conferring with Italian and American godfathers and laying groundwork for a worldwide crime cartel, which he plans to eventually take over. When Igor visits the HQ of the Russian mob at the Odessa Bar and Grill at Brooklyn's Brighton Beach and summarily executes three punks as an object lesson, the case comes under Cowley's jurisdiction, and he asks for Danilov's help cross-checking the corpses against Russian records. Learning Orlov is responsible for the car-bombing death of his lover, Danilov secretly plots revenge. More killings link the two events, and FBI stakeouts in Moscow take the action to Berlin, where Orlov sets a trap resulting in a mass car-bombing near the Berlin Wall Memorial. Cowley, fighting to keep his alcoholism at bay, dealing with political pressure and preventing Danilov from becoming both jury and executioner, flies to Moscow, where a pulse-pounding, satisfying final confrontation brings an end to this rousing international thriller.