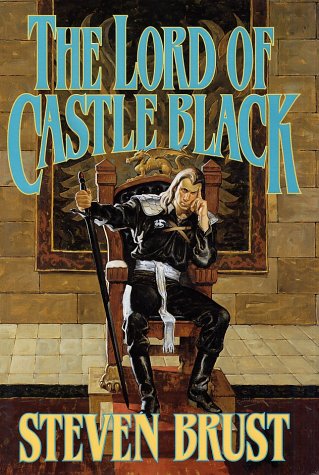 THE LORD OF CASTLE BLACK: Book Two of the Viscount of Adrilankha

Full enjoyment and occasionally mere understanding of Brust's first book in his Viscount of Adrilankha series, (2002), depended on knowledge of the author's two earlier books, (1991) and (1994), inspired by Dumas 's swashbuckling D'Artagnan romances. This amusing if somewhat pale pastiche makes similar demands. Zerika, the Phoenix Heir, emerges from the Paths of the Dead with the Orb. Thus Zerika becomes empress and the Interregnum ends, but pseudo-Emperor Kâna has two huge armies rushing to possess the Orb. Luckily, the Musketeer-like Khaavren, Pel, Aerich and Tazendra have reunited and—along with Khaavren's son Viscount Piro of Adrilankha, hero of , and his companions—make up a small but valiant band to defend and reinstate the Empire. Meanwhile, the Dragonlord Morrolan, befriended by the Enchantress of Dzur Mountain, is fulfilling his vision and establishing himself as Count of Southmoor. As before, the author uses the conceit of his being the "translator" of the prolix historian Sir Paarfi to narrate and overexplain. Once Brust completes the trilogy, readers will probably be well rewarded by reading all five volumes of this wry high fantasy epic in order, but starting here may prove perplexing.