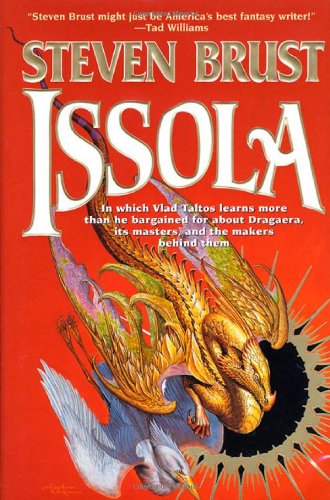 The dashing Lord Vlad Taltos returns in this ninth installment of the Taltos series (after 1998's popular , which some would consider a stand-alone story), in which the hero engages in more philosophical musing than muscle work. Still a renegade, Jheregan outcast and witch, Taltos must rescue, once again, his Dragonlord friends, Morrolan e'Drien and Aliera e'Kieron, this time from the powerful creators of Dragaera, the Jenoine. Accompanied by his faithful familiar, the funny pocket dragon, Loiosh, Taltos as usual relies on his psychic and magical strengths as well as his dazzling swordplay. But what sets this adventure apart from his others is the tone. The author starts off slowly, concentrating on setting up the relationship Taltos develops with Teldra, the Issolian chatelaine of Castle Black, whose gentle manners captivate Taltos and teach him new ways to deal with problems. The dangerous Jenoine utilize sleight of hand and massive illusions that Taltos and his friends have to crack in order to save Dragaera's source of amorphia (aka chaos) from the Jenoine and themselves. Fans will enjoy all the inside jokes and references to earlier books, but newcomers may feel a bit lost until Brust cranks up the volume midway and the story begins to crackle with easily understood tension. It stops just short of becoming a romance between Teldra and Taltos, leaving lingering doubts as to whether their "relationship" will ever end. Though not as meaty as some fans might wish, the novel provides more than adequate fantasy fare.