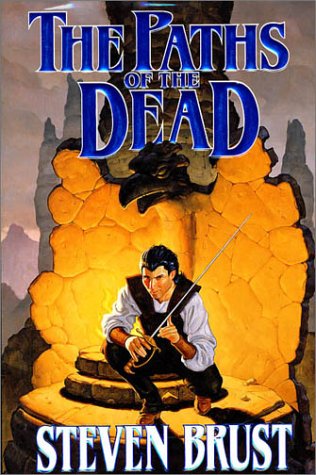 THE PATHS OF THE DEAD: Volume One of the Viscount of Adrilankha

In his latest chronicle of the Dragaeran Empire, Brust () conjures the spirit of Dumas (the subtitle evokes the Viscount trilogy that includes ), though he less successfully captures the panache of those classic swashbucklers. The mock historic narrative follows Khaavren and other heroes from the author's earlier books (; ; the Vlad Taltos series) and gives the origins of later ones in the course of the epic restoration of the Dragaeran Empire. Piro, son of Khaavren and heir to his father's role of protector of the Emperor, seeks to help a childhood friend achieve her destiny. With polished manners and courteous speech, he must maneuver his way amid a number of similarly equipped folk to escort his friend to the Paths of the Dead, entryway to the Halls of Judgment (where sit the gods), so that she may retrieve the Imperial Orb, linchpin of empire. After that, the real work begins. Brust strives hard to recreate Dumas's charm, including a mix of humorous and tragic elements, a romantic tone, intersecting plot lines, themes of vengeance and return, slightly effete nobles and somewhat clownish (if sensible) commoners. The author might have done better to ascribe comic verbal ticks to only a few characters. Also, since much of the character interaction depends on knowledge of previous books, casual readers will be occasionally puzzled.