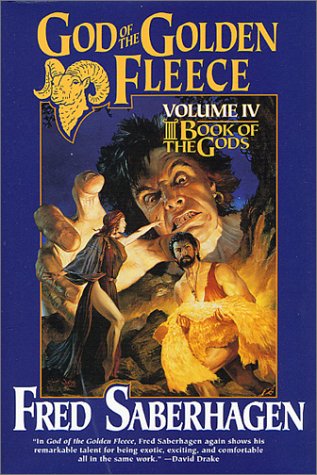 GOD OF THE GOLDEN FLEECE: The Fourth Book of the Gods

Best known for several long-running series (Berserker, Swords, Dracula), Saberhagen is now working inventive changes on Greek myths. The story of Jason and the Argonauts provides the basis for this fourth myth-based novel (after 2000's ), in which a naked man staggers out of the sea, shipwrecked and amnesiac. He knows only that his name is Proteus and that he must be part of the 's crew as they search for the Golden Fleece. Repairing the character's missing memory is a deft way to introduce readers to the tangle of alliances and betrayals behind the original myth. In fact, however, even readers who think they know the story will be surprised. Things don't always happen according to the myth—for one thing, bystanders sometimes weren't observing carefully; for another, it's clear that super-science rather than magic underlies many of the strange events. It's impossible to say whether the book is set in an alternative past before "history" jelled or in the far future, when our history has been forgotten. Fair enough: readers should be wary as they watch gods interfering with mortals while plotting against each other and also trying to avoid hostile, superhuman giants in this bewildering, dangerous world. This isn't one of Saberhagen's best books, but the hints of hidden motives and secret powers are intriguing enough to keep fans alert for the next book in the series.