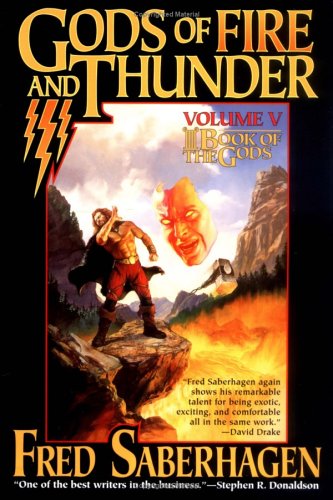 GODS OF FIRE AND THUNDER

In his fifth Books of the Gods entry, veteran Saberhagen (the Berserker, Dracula and Swords series) offers a naturalistic retelling of Germanic myth, steering his usual middle course between the grittily realistic and the fantastic. One survivor of (2001) wanders into the middle of a Wagnerian cast and plot, including Wodan, Brunhild, Baldur, assorted Valkyries, flying horses, gnomes and a battle between the gods and the Underworld on the plain of Asgard. Armed only with cunning and a shabby piece of the Golden Fleece, Haraldur ("most call me Hal, to save themselves a little breath and effort") manages to sneak into Valhalla, single-handedly defeat a berserker, steal a Valkyrie's steed, penetrate Loki's stronghold, discover the stolen treasure of the gnomes, witness (or cause) the deaths of three gods and fight side-by-side with Wodan in the Last Battle. Despite the operatic overtones of his material, the author grounds his tale in a very unromantic reality. The noble figures and ideals of the old stories, like Valhalla, look better from a distance. Up close, draughty halls and leaky roofs do not a warrior's paradise make. The separation of appearance and actuality gives the book a dollop of ironic humor and a chance for Saberhagen to introduce his own superscience clues about the powers of the gods. Fans will recognize his technique of blurring the relation of the setting of both myth and history to produce a hybrid that allows him much free rein of invention within the standard story lines.