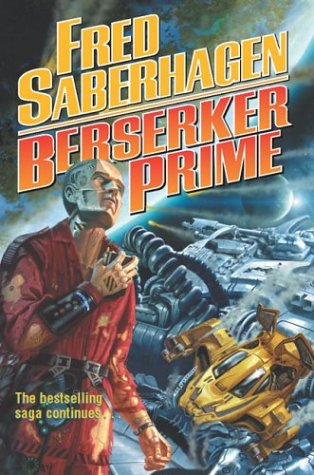 The ninth book in Saberhagen's Berserker series ( , etc.) concerns yet another attempt by humanity to survive the life-destroying machines of an ancient race. "Berserker" is the name given to the dreadnought of unknown origin that invades the twin-planet system of Prairie and Timber just as it's on the brink of war with the Huveans of another system—and as Belgola, the Twin Worlds president, is turning his rule over to a computer. Incidentally lampooning Asimov's laws of robotics, the story champions the cause of man over machine with its focus on certain values such as determination (dreadnought and scout-ship captains don't give up even in the face of inevitable death) and valor (cadet Dirigo sacrifices his life saving his friends). The heroes are larger than life, the robotic enemies implacable in their evil. The large supporting cast includes Gregor's granddaughter, Luon, and a Twin Worlds "hostage" from the Huvean nobility, who pursue a Romeo-and-Juliet romance. The shifts from the big picture to the individual view of the many space battles enrich an otherwise familiar plot that lumbers to a predictable conclusion. Still, this is a dependable read for fans of Saberhagen or space opera, as long as they don't examine too many details of the science, plot, setting or characters.