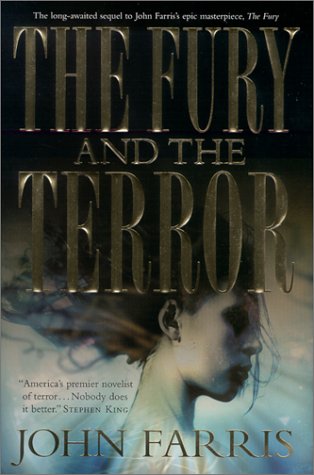 THE FURY AND THE TERROR

Terrormeister Farris's sequel to outdoes its bestselling predecessor in mystery, malevolence and mayhem. Moving at video-game speed, this fanciful thriller pits ambitious politicians against psychics on the run to save America. The novel opens with a bang as Eden Waring's college valedictory speech turns into a warning that an airplane is about to crash on campus. Eden's adoptive parents take refuge in the countryside, and her boyfriend decides which side he's on, while Eden hides from MORG, the secret government agency for psychic bioengineering, and from an evil First Lady—both seeking to harness Eden's powers for their own ends. On the run, Eden develops such skills as producing her doppelgänger at will; she also learns she is the daughter of the preceding novel's heroine, Gillian (dead but still visiting Eden in her dreams), and of Gillian's soul mate, Robin (alive but held captive in MORG's Montana hideaway). Eden joins forces with an ex–game hunter once married to her mother, and with a beautiful black model with a few powers of her own, to thwart the First Lady's plan to take over the White House, MORG's effort to control psychic activity and a terrorist plot to wreak havoc at a Garth Brooks concert. Farris (; , etc.) packs his novel with villains, explosions and odd, occasionally grotesque characters possessed of just enough charm to make readers care. Through frenzied plot twists, he mixes humor with pseudo-science, creating his own world—which he promises we can return to in the forthcoming

The Fury The Fury