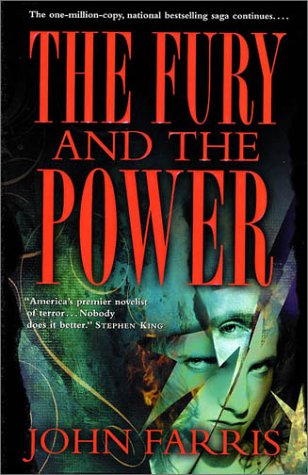 THE FURY AND THE POWER

Wilder and weirder than its predecessor (), this second sequel to Farris's trendsetting supernatural thriller (1976) takes risks that will befuddle newcomers but titillate loyal fans used to his audacity. Once again second-generation psychic Eden Waring is pursued by malevolent forces hell-bent on harnessing her awesome and largely unrealized paranormal powers. This time the villain is the sinister demiurge Mordaunt, known to his adversaries as "The Dark Side of God." In the guise of stage magician Lincoln Grayle, Mordaunt has been endowing select attendees of his Vegas extravaganzas with fearsome shapeshifting powers, then using them as assassins against prominent world religious leaders. It's surely not a coincidence that these events draw Eden and her team of psychic operatives out of seclusion and into the magician's sphere: Mordaunt needs Eden's doppelganger, Gwen, who can travel through time, to retrieve the half of his soul imprisoned in a mortal form in 1926; he also plans to impregnate Eden to further his plans for domination of the earthly dimension. There are more twists and turns in the plot than in a nest full of snakes, but Farris distracts readers from the improbabilities and logic stretches with strategically timed blasts of paranormal pyrotechnics and old-fashioned gory gunplay. The ending holds a few disappointing surprises, including plot threads left dangling until the forthcoming , but readers who have sojourned thus far in the strange and chaotic world of Farris's fiction will surely return for another installment.