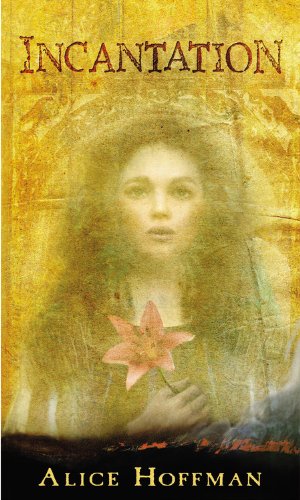 As she did in , Hoffman offers another fascinating glimpse of a past civilization—with reverberations for both past and present—in this moving novel set during the Spanish Inquisition. The year is 1500 and, in the village of Encaleflora where 16-year-old narrator Estrella lives, Christian soldiers, "driven by bloodlust and evil," crusade against all forms of heresy. First, they burn books; next, they rob Jewish and Muslim families of their possessions, then torture or kill them. Readers familiar with Jewish traditions may guess what Estrella does not yet know about her family: that they are , "new Christians," a community practicing the Jewish faith in secret. With expert pacing and lyrical prose, Hoffman lays out the clues that lead Estrella to self-discovery while also educating readers about the nuances of the times. Early signs point to the heroine's best friend Catalina's eventual betrayal of her (she invites Estrella over for a dinner of sausage, for instance), because she is jealous of the attentions Estrella receives from Catalina's cousin and fiancé, Andres. During her darkest hours, after her grandfather, mother and brother are brutally murdered, Estrella still refuses to compromise her values or her devotion to Andres, who returns her love despite the dangers. Even secondary and tertiary characters emerge fully formed, while Estrella's spare, eloquent narrative evokes her sorrow and her determination to survive and never to forget the atrocities she has witnessed. "Even when I was an old woman,... older than the oldest raven in the sky, I'd remember everything I'd ever known and seen," she vows as she prepares an escape to Amsterdam. Ages 12-up.