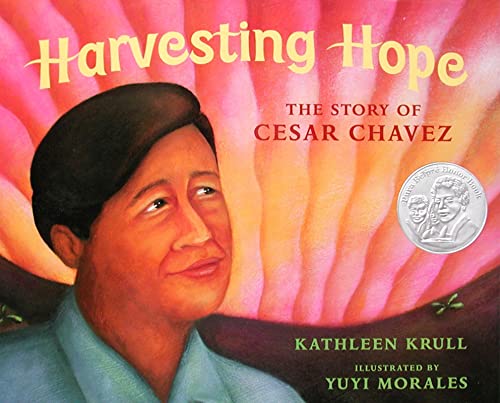 Krull (; the Lives of... series) turns readers' attention to Cesar Chavez (1927–1993), founder of the National Farm Workers Association and champion of migrant workers. A lyrical portrait of a glorious early boyhood on his family's Arizona ranch opens the sympathetic narrative and explains that drought forced the family off their land in 1937 and consigned them to the grueling life of itinerant manual farm labor. Krull selects details that the target audience will readily understand; for example, she notes that Chavez attended 35 schools (he left after eighth grade) and that a teacher once hung a sign on him that read "I am a clown. I speak Spanish." The author also stresses Chavez's struggles to overcome extreme shyness and his commitment to nonviolent means of protest, demonstrating the latter in a climactic account of the landmark farm workers' strike and protest march led by Chavez in 1965. Debut illustrator Morales's mixed-media, full-bleed art taps into folkloric qualities that enhance the humanity of the characters. Using the bright colors of Mexican art, she skews the landscapes to reflect the characters' emotions. Sweeping, organic brushstrokes often angle diagonally, painting purple skies above green California fields or dividing rows of brown earth. The visual statement is as powerful as the story. Ages 6-9.