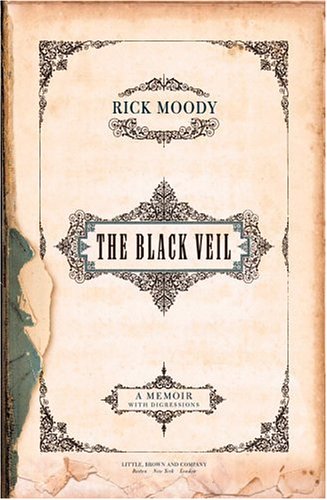 THE BLACK VEIL: A Memoir with Digressions

Moody's first foray into nonfiction is a curious amalgam of family history, literary criticism and recovery memoir. The title refers to Nathaniel Hawthorne's "The Minister's Black Veil," which, according to Moody, is based on the true tale of a Moody ancestor who wore a veil throughout his adult life as penance for accidentally killing his boyhood friend. Having this familial connection, Moody (; ; etc.) also links it to the sadness he experienced as an underpaid, overeducated 20-something searching for himself, first in San Francisco and later as a publishing assistant in New York. He alternates between explaining Hawthorne's story, describing trips to research his colonial-era paternal heritage and depicting how its legacy of apparent freakishness lives in him. In one bizarre episode, Moody confesses having had throughout much of his mid-20s a fear of being raped, an anxiety that eventually led to an alcoholic breakdown. Much of what Moody discovers in Maine graveyards, in old, coded diaries and in his delusions reinforces his own suspicions about a melancholic family inheritance. He's rarely straightforward, interweaving much of the book with occasionally cryptic passages by other authors, along with his own italicized commentary. This hybrid composition will surely enhance Moody's reputation as a thoughtful prose stylist, though he fends off the temptation of self indulging in the intense demands of self-scrutiny with an occasionally dry and strident tone. By the end of this daring experiment, it's clear that, even as the discoveries mount, forcing the veil of the past to fall away and revealing a sympathetic and sensitive man, Moody still hasn't managed to lose his angst.