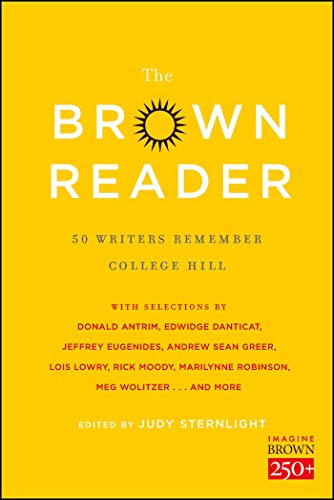 This appealing collection, edited by Brown alum Sternlight, is neither an ode to the institution nor a glossy publicity stunt marking the university’s 250th anniversary. It’s a relaxed roundtable of reminiscences from accomplished graduates—writers, journalists, filmmakers, artists—that evidences the “loosey-goosey, roll-with-it” intellectual aesthetic for which Brown is known. Generally appreciative, with rare moments of self-indulgence, the essays, poems, and visual art from contributors including Donald Antrim, Edwidge Danticat, and Meg Wolitzer tell familiar narratives of the tumultuous college years: angst and insecurity; entering a “world of ideas and action”; the awakening of passions for a cause, a profession, or a person. Stories are told with sincerity, skill, and an occasional, welcome shot of sarcasm, as seen in Rick Moody’s hilarious mock syllabus and Jeffrey Eugenides’s sly jabs at the Ivies. Some selections are frankly philosophical and some political, taking stock of a culture, an era, or historical moment, such as the push for Brown’s infamous “No Curriculum” or the walkout of black students in 1968. Non-Brunonians, standing outside the charmed gates of College Hill, can still relate to the stories of doubt and revelation, share the fondness for one’s alma mater as a place both “sheltering and stimulating,” and relive that unique prickling sensation of the intellect expanding. Agent: Wendy Strothman, Strothman Agency. (May)
close
Details