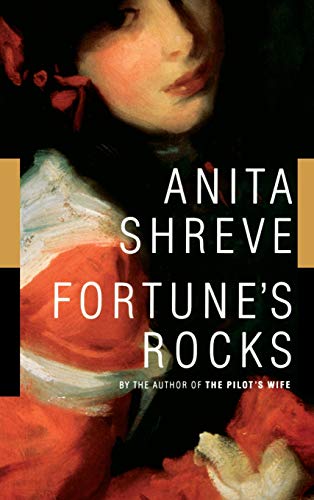 In what surely will be a milestone in her career, Shreve has produced a literary novel with enormous commercial appeal. It's a scandalous love story told with dignity and integrity, and a finely etched portrait of American society at the turn of the last century, a narrative that accurately reflects vanished manners and mores, while reconfirming the universality of human emotions. Olympia Biddeford, the spirited, self-confident, highly intelligent daughter of a Boston Brahmin family who summer in Fortune's Rocks, on the New Hampshire coast, is 15 years old in June 1899, the season of her sexual awakening. Her father's friend, Dr. John Haskell, a talented essayist as well as a physician committed to helping the poor, is 26 years Olympia's senior, married and the father of four. Shreve's account of their love affair is a marvel of freshness. In what resembles an exquisitely controlled slow-motion film (one thinks of the sun-dappled sequences in Elvira Madigan), Shreve shimmeringly describes a young girl's first experience of ardent attraction, combined with her first experience of mortal sin. Both Olympia and Haskell are engaging characters who cannot resist the passion that eventually destroys several lives besides their own. The bliss of their affair--rendered at fever pitch, but without false sentimentality--builds tension about the inevitability of their discovery. Although expected, the event comes with a staggering shock, one of many such surprises that Shreve injects in the narrative--impressively so, since none of the plot twists evade credibility. Even when the baby born of the liaison is taken from Olympia, Shreve avoids excessive drama. Instead, she conveys interlocking ironies foreshadowed early in the relationship, when Olympia accompanies Haskell to a clinic in nearby Ely Falls, where she first becomes aware of the desperately poor Franco-American millworkers whose wretched lives will one day intersect with hers. The level of suspense never falters, but becomes breathtaking during a custody court battle (based on late 19th-century legal precedent) involving these factory laborers, who were once an important subculture in New England. The astounding denouement of cascading events will leave no reader unmoved. While Shreve's books always show evidence of meticulous research, her hand has never been so sure as it is here. The fabric of privileged upper-class life in the 1890s is rendered in such details as the relationships between masters and servants, the daily routine at the Biddefords' ""cottage"" in Fortune's Rocks and in precise descriptions of home furnishings, clothing and dining. The rigid decorum of the era is conveyed with the clarity of Edith Wharton, and reflected in the formal vocabulary and the rules governing civilized conversation, and the moral code that regarded unwed mothers as despicable outcasts denied even the most minimal consolations of the social contract. Given Shreve's popularity, and adding what will surely be fervent word-of-mouth endorsement, this book should take off like a rocket. Agent, Virginia Barber. $200,000 ad/promo; BOMC main selection; 15-city author tour. (Dec.)
close
Details