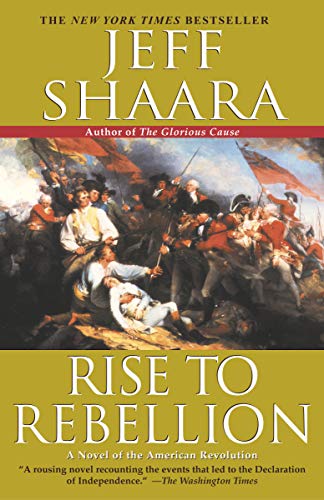 Once more breathing vigor and passion into the dusty annals of our nation's history, the author of the bestselling Civil War trilogy (; ; ) demonstrates an ever-growing level of literary competence in the first installment of his projected two-volume saga of the American Revolution. Spanning the crucible years beginning with the Boston Massacre in March 1770 and continuing through the signing of the Declaration of Independence on July, 4, 1776, the story is told from the perspective of a handful of characters well known from our history books. In Boston, the Sons of Liberty activist Samuel Adams and his younger, more intellectual and oratorical second cousin, John Adams, speak out against King George III. In London there's aging Philadelphian Benjamin Franklin, who has resided for a number of years abroad, an agent for home colony Pennsylvania (and others). In New York, Gen. Thomas Gage is the ranking British officer on American soil. And heroic colonial planter George Washington has risen to full colonel in the Virginia militia fighting for George III during the French and Indian War. This masterful dramatization of the fateful escalation of the rebellion following the Boston Massacre moves from the battles of 1775 at Lexington, Concord, Fort Ticonderoga, Bunker Hill and the siege of Boston, through the convening in 1776 of the Continental Congress and the reading of the Declaration of Independence. Richly embroidered with portraits of such heroes as Patrick Henry, Thomas Paine, Paul Revere, John Hancock and Thomas Jefferson, the tapestry chronicles America's plunge toward liberty.