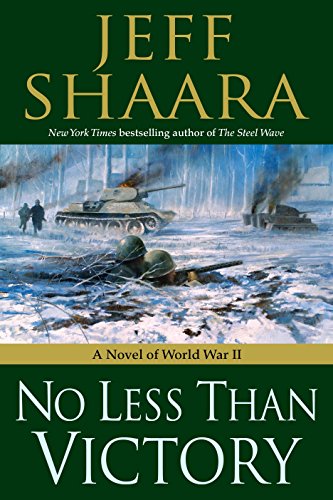 No Less than Victory

Firmly straddling the ground between war novel and military history, the conclusion to Shaara's WWII European theater series contains the usual mix of real life military leaders and fictional soldiers in combat, recapitulating the last five months of the war, from the Battle of the Bulge to the liberation of concentration camps. Shaara's real-life figures (generals Dwight D. Eisenhower and George S. Patton, Field Marshal Gerd von Rundstedt) mostly appear in stilted scenes to discuss strategy, while fictional characters carry the narrative by doing the fighting. Thanks to Shaara's visceral descriptive powers, we ride on a bombing mission with bombardier Sergeant Buckley as his B-17 flies through the flak-filled skies over Germany. With Private Benson, we feel the cold, deprivation and sense of dislocation of the Ardennes. And we sit in an observation post right on the Germans' doorstep as Captain Harroway calls down artillery fire on the enemy. In the end, Shaara delivers nothing we haven't already read in Stephen E. Ambrose's or Cornelius Ryan's , but fans of military fiction will definitely gobble this up.