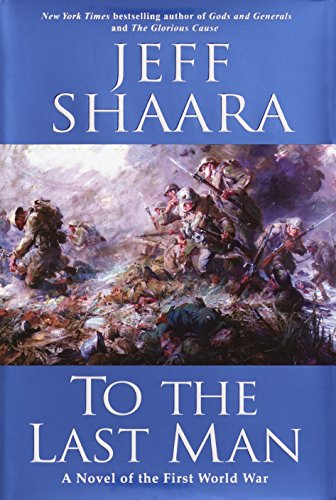 Moving on from the American Revolution and the Civil War, Shaara ( , etc.) delivers an epic account of the American experience in WWI. As usual, he narrates from the perspective of actual historical figures, moving from the complexity of high-level politics and diplomacy to the romance of the air fight and the horrors of trench warfare. Gen. John J. "Black Jack" Pershing commands all American forces in France in 1917–1918 and must prepare his army for a new kind of war while resisting French and British efforts to absorb his troops into their depleted, worn-out units. Two aviators, American Raoul Lufbery and German Manfred von Richthofen (the Red Baron) fly primitive aircraft in an air war that introduces new ways to die. And Pvt. Roscoe Temple, U.S. Marine Corps, fights with rifle and bayonet in the mud and blood of Belleau Wood and the Argonne Forest. These men and a supporting cast of other real-life characters provide a gruesomely graphic portrayal of the brutality and folly of total war. Shaara's storytelling is occasionally mechanical—he has yet to rise to the Pulitzer Prize–winning level of his father, Michael Shaara ( , etc.)—but his descriptions of individual combat in the air and the mass slaughter on the ground are stark, vivid and gripping. He also offers compelling portraits of the politicians and generals whose strategies and decisions killed millions and left Europe a discontented wasteland.