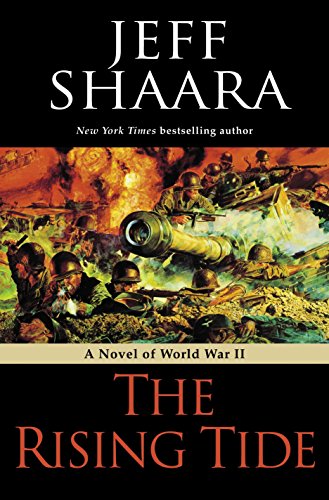 The Rising Tide: A Novel of the Second World War

Shaara ( ; ), who has written bestselling and critically acclaimed historical novels covering the American Revolution through World War I, takes on World War II in the wonderful first volume of a planned trilogy. As the book begins, Hitler's forces control western Europe, and U.S. troops face off against the Germans in North Africa. From fall 1942 through spring 1943, the Allies battle Field Marshal Erwin Rommel's Afrika Korps. Shaara evokes the agony of desert warfare and the utter chaos of an airborne assault through the experiences of Pvt. Jack Logan, a tank gunner, and Sgt. Jesse Adams, a paratrooper. The challenges—and frequent frustrations—of command are seen through the eyes of such luminaries as generals Dwight Eisenhower, George Patton and Rommel. The Allied victory in Africa is followed by the conquest of Sicily and the invasion of mainland Italy in 1943. With the Italian campaign sputtering, the Allies turn to planning for the decisive event of the European theater, the cross-channel invasion of France, which is where Shaara concludes this sprawling, masterful opening act.