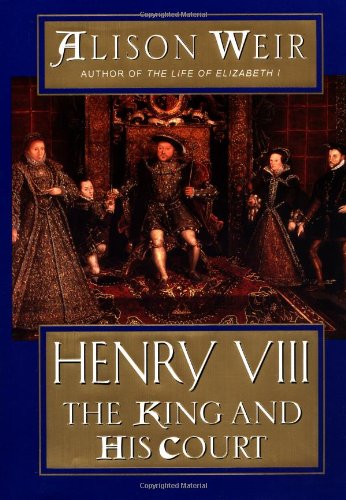 HENRY VIII: The King and His Court

In a succession of books on medieval and early modern monarchs, Weir has established her credentials as one of the most evocative of popular historians. In (which will be reissued in paperback to tie in with this publication), she brushed aside a forest of scholarly debate in favor of fully rounded human portraits. She now turns to the colossal figure of Henry VIII, aspiring chivalric hero and accidental spearhead of the Reformation. In the age's luxurious ceremony, Weir is thoroughly in her element. She revels in the Field of Cloth of Gold, an elaborate showpiece where Henry met his French counterpart; in the zesty supporting cast; and even in the less appetizing duties of the Groom of the Stool. Henry's passions were many and charming: his beloved dogs Cut and Ball were evidently so prone to getting lost that he would pay some £225 to their finder. Weir's fondness for her character has its difficulties. While admitting that the king proved to be "an imperious and dangerous autocrat who became mesmerised by his own legend," she too is seduced by the myth. Given to romantic hyperbole, she concludes with the largely unsupported sentiment that Henry "excelled all who ever wore a crown"; chalk up another victory for his propagandists. Other problematic characters, like Thomas More ("calm, kind, witty and wise"), are also let off lightly. Still, Weir's nose for detail, her sharpness of eye and her sympathetic touch make this a feast for the senses.