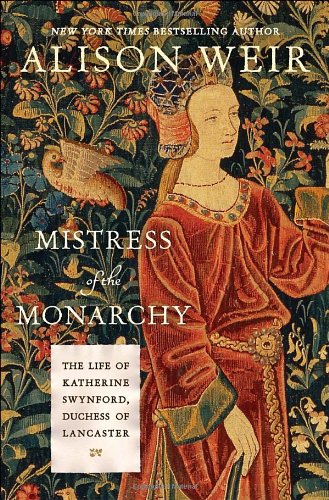 Mistress of the Monarchy: The Life of Katherine Swynford, Duchess of Lancaster

Veteran royal biographer Weir ( ) resurrects the life and times of the remarkable woman who was mistress and eventually the wife of John of Gaunt, duke of Lancaster, third son of the charismatic and accomplished king of England, Edward III. Through John and Katherine Swynford (1350–1403) descended centuries of British sovereigns, including Queen Elizabeth II. Weir makes use of meager contemporary sources to build a convincing case for an intelligent, poised and talented woman who flouted convention and took control of her destiny in a male-dominated age. After the death of her first husband, one of John’s knights, Katherine embarked on an illicit and notorious liaison with John, married to the queen of Castile; the connection survived separations and calamities, and she bore him four children. Repentant in the wake of the Peasants Revolt, John broke off the liaison, but after his wife’s death, he risked censure to marry her, making her stepmother to the future Henry IV. Weir’s well-researched, engrossing and perceptive biography gives a gutsy beauty her due while vividly describing the age of chivalry and its many players, including Katherine’s renowned brother-in-law, Geoffrey Chaucer. 16 pages of color photos.