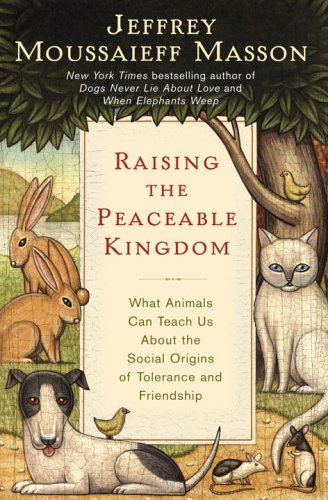 Raising the Peaceable Kingdom: What Animals Can Teach Us About the Social Origins of Tolerance and Friendship

Masson ( ) records his attempt to "raise together a kitten, a puppy, a bunny, a chick, and a baby rat" in hopes that this "might offer some lessons to us humans" on how to avoid bigotry and war. The result hovers between science and cute animal stories, with not enough of either to succeed. Masson tells us a great deal about handpicking the animals, choosing a cat bred not to hunt and a nonaggressive dog, but not much about how he introduces them to one another and their changeable living situations. His discoveries about the animals seldom rise above the banal (rats have delicate ears; chickens eat insects). More of his attention goes to agonizing about reading the animals' emotions and fretting over—but not grappling with—the conflict inherent in wanting to provide the animals with as natural a life as possible while impatiently expecting them to overcome hardwired reactions to predators and prey. In the end, some of the animals become buddies, but one rat dies under mysterious circumstances, and the "peaceable kingdom" proves stressful for the dog. Masson's peaceable kingdom seems unattainable fantasy. B&w photos.