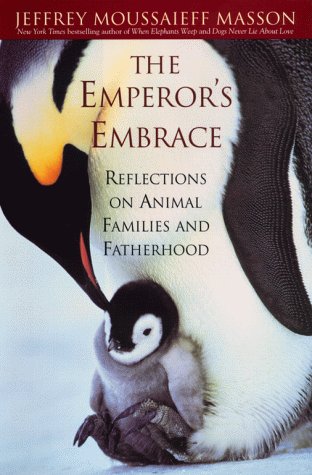 The Emperor's Embrace: Reflections on Animal Families and Fatherhood

Why do wolves make better dads than dogs, and what can they teach us about our own fathers and sons? Following up on his earlier bestsellers (When Elephants Weep; Dogs Never Lie About Love), Masson investigates the varied, sometimes inspiring roles of male parents across the animal kingdom, summarizing published research on (among others) penguins, lions, bears, prairie dogs, orcas, gray whales, frogs and sheep. Most of the book consists of such natural histories, many of them memorable. Male emperor penguins may huddle together for warmth through the bulk of the Antarctic winter, unable to eat, each balancing a single egg on its feet to prevent it from freezing on the ice. Tiny marmoset dads carry their children all day while their mothers forage for food. Like Diane Ackerman, Masson writes natural history in the tradition of a humanist, not a working scientist. Though he invokes such trailblazing ethologists (animal behavior experts) as Niko Tinbergen, Masson differs from most professionals in insisting, even assuming, that all animals have emotions comparable to humans: ""is it not possible,"" he asks, ""that even a fish can develop affection for another fish... ?"" Wise readers will bypass such insistences, or treat the wildest as metaphors, and then absorb the well-told array of stories about (mostly) admirable animals. Scientifically literate perusers may get distracted by minor mistakes (""neoteny"" doesn't mean what Masson thinks it means; street pigeons aren't descended from passenger pigeons). But the same readers may enjoy watching Masson's evidence crush would-be sociobiologists' ideas of intrinsic, cross-species meanings of maleness. If penguins, wolves and pairs of male black swans routinely make involved and coequal fathers, deadbeat dads seem to have little excuse to blame their genes. Agent, Elaine Markson. (Oct.)
close
Details