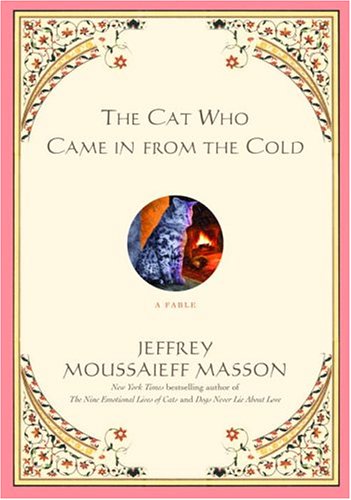 THE CAT WHO CAME IN FROM THE COLD

A Sanskrit scholar and former projects director of the Sigmund Freud Archives, Masson is best known for his sensitive exploration of animal psychology in books such as the bestselling . In this sentimental, didactic fable, Masson imagines how the lone nonsocial domesticated animal came to share hearth and home. Billi, an Asian leopard cat, lives in a mango forest in ancient India. He enjoys his independence, but he feels pangs of loneliness and curiosity about the "two-foots." He learns their languages—Hindi, Malayam and Sanskrit—and he can "see the appeal of south India's three major religions." Billi embarks on a quest to learn more about humans by discovering what their animals think of them. A water buffalo mourns being underappreciated; a parrot bemoans his cage; a mongoose tells a chilling story about human ingratitude. Humans worship you, Billi says to a cow. "Oh, great," the cow says. "That and five rupees will get you a chapati." Nine months of travel and no truly good word for humans leaves Billi undeterred, and, back home, he seeks out a young girl he'd often watched. It's not easy proving his good intentions or trying to be "the animal to have a mutually satisfying relationship with humans." But Billi makes it happen in a story that's heartwarming but only for the passionate aelurophile.