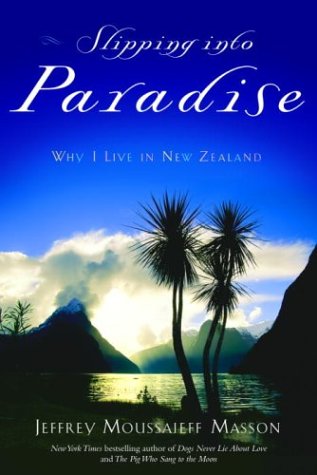 SLIPPING INTO PARADISE: Why I Live in New Zealand

Should you move to New Zealand? "The short answer," writes Masson in this breathless paean to his adopted home, "is 'Yes.' " Comprising two large islands, New Zealand is "the green gem in the middle of the South Pacific." Its physical beauty will be familiar to anyone who's seen : the country boasts a temperate climate, beautiful beaches, towering mountains, exotic animals and lush vegetation. New Zealand's human inhabitants are just as remarkable, legendary for their modesty and warmth. When Masson, an American psychologist and author ( , etc.), wants to interview the foreign minister, he finds him in the phone book. When he wants to chat with the country's most famous icon, Sir Edmund Hillary, he simply drops by his home. Though Masson is eager to portray New Zealand as "benign, gentle, friendly, and safe," he also acknowledges that it can seem remote, provincial and dull. Actually, the country's isolation may explain why it has one of the world's highest suicide rates, and why Masson spends three months of each year elsewhere. Blending history, geography, memoir and travelogue, Masson's book is a hodgepodge, but it succeeds in promoting New Zealand as an attractive place for a vacation—if not a permanent stay. Maps.