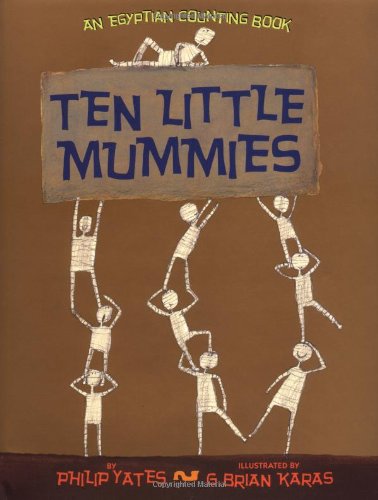 Mummies dance—and play croquet—in this cheeky countdown primer starring 10 well-bandaged ancestors from the pharaonic age. Although they start out in a dark tomb, "wrapped up in themselves" and "bored stiff" (two of the book's many so-bad-they're-good plays on words), the gang soon escapes to the desert—which Karas () captures in the saturated blues, golds and browns associated with Egyptian decorative art. "Eight little mummies/ committed hijinks," writes Yates (coauthor of ), "One was arrested for painting the ." The fun and mischief continue even as their numbers dwindle one by one; with their intense dot-eyes and wiry, determined bodies, these mummies have enough energy for several afterlives. The humor is dark—one mummy is carried off by a falcon, another blown away by a sandstorm, and one simply comes all undone—but Karas's playful compositions keep the tone light (e.g., the other mummies look on with concern as their friend unravels during a chariot race), and all 10 tomb mates are safely and happily reunited in the end, anticipating even more fun to be had the next day. Ages 3-7.