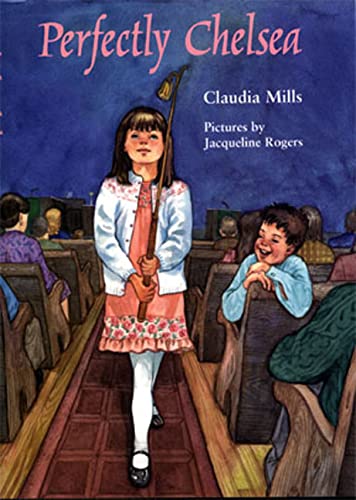 Mills (the Gus and Grandpa books) takes this knowing middle-grade novel into less traveled territory: Chelsea, the nine-year-old perfection-seeking protagonist, spends a lot of time at church and Sunday school and thinks about religion, both her own and her best friend's, Naomi's. Chelsea isn't exactly sanctimonious. Although readers meet her in church, imagining a halo hovering over her "neat, just-combed hair," she soon cuts the church bulletin into a fortune teller. However, her biggest concern is whether she'll do a "wonderful" job as an acolyte (in fact, the flame on her candlelighter goes out as she walks ceremoniously down the aisle). Elsewhere, she worries that Danny, her nemesis at church, has offended Naomi by asking if she has a Hanukkah bush in place of a Christmas tree, the way a Jewish boy in his class last year did (Naomi doesn't mind). Chelsea suffers further indignity when she rings the wrong bell during the debut performance of her church bell choir, and later makes a bigger mistake. There are several genuinely tender moments here: the girl becomes angry with God when a neighbor dies of cancer, even though the entire congregation has been praying for her; and is devastated when her beloved minister moves to another church. Some episodes seem overly orchestrated, but on balance the conflicts, and the characters, seem lifelike and engaging. Ages 7-10.