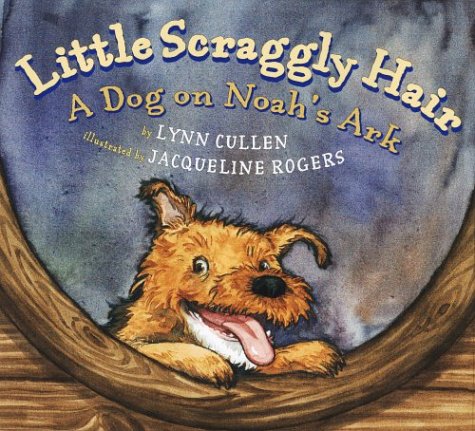 Using colloquial language and folk tale elements, Cullen ( ) employs the story of Noah's Ark as a vehicle to explain the special relationship between people and dogs. The story begins "way, way back, long before your great-granddaddy's time, [when] dogs had warm, dry noses... [and] folks didn't take much to dogs." Chased by other dogs, Little Scraggly Hair arrives in the yard where Noah is building a huge boat. Noah shares his meal; the dog becomes his devoted helper. When it's time to collect the animals, Noah's wife and children are"sore ashamed" of his strange behavior (building an ark, befriending a dog), and "don't none of them do a lick of work." The dog chases them all into the ark just before the flood, then squeezes himself between a bear and a buffalo and thrusts his nose through the knot-hole; there his nose stays, until the dove finally lands on it. Rogers's ( ) illustrations abound with comic and homey touches: she shows Noah's disgruntled family in a log cabin, dressed as pioneers; aboard the ark, a boy lounges atop the pandas, a girl braids the goat's beard. The cold wet nose becomes almost as much of a covenant as the rainbow: Noah says that the dog can stay with the family until its nose grows warm and dry; nowadays, Cullen concludes, "seems it's always been that a-way." A dog-lover's delight. Ages 5-8.