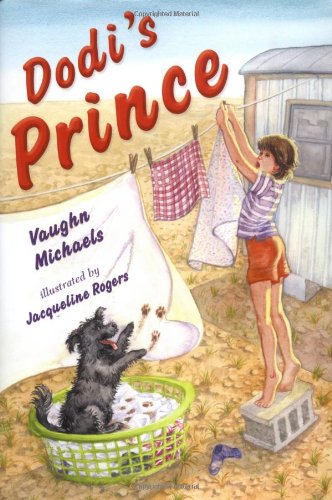 Michaels debuts with a twangy novel about an eight-year-old who lives with her parents and three brothers in a Texas trailer park. Dodi, the chatty young narrator, has been feeling bereft since her best friend moved away: "I didn't have me a friend to play with.... [I have] three brothers and no sisters. Not even one. And it was summer. Things were getting mighty lonely, let me tell you." The appearance of a frisky, seemingly homeless dog, whom she quickly names Prince, promises to change all that—once Dodi surmounts a few obstacles, that is. Following her Daddy's orders, she canvasses the trailer park for the dog's owner (readers, unlike the heroine, will spot the owner, who is happy enough to relinquish the dog). Next, she must persuade her mother to let her keep Prince, an especial challenge in light of his canine misdemeanors (e.g., destroying her younger brothers' favorite stuffed bear, digging up a neighbor's garden). But Prince earns a permanent home when he pulls off back-to-back acts of bravery, scaring away a bobcat and alerting Dodi's family to a fire in a nearby trailer. The plot is predictable, but it's not the main draw here. Dodi's voice establishes her as a plucky, eminently likable heroine, and her relationship with Prince is likely to warm the hearts of young dog lovers. Final artwork not seen by . Ages 7-10.