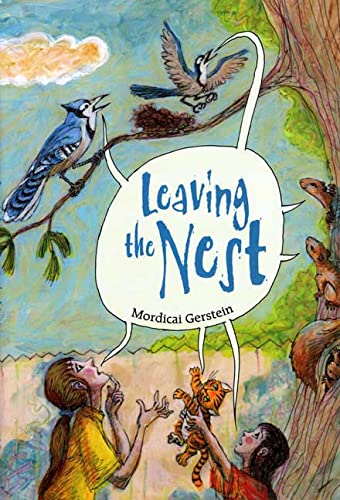 Four stories about a baby bluejay, kitten, girl and baby squirrel converge in this picture-book drama. Readers follow the connected story threads via cartoon-like thought balloons to make sense out of the resulting mayhem. Initially, the characters often speak to themselves rather than to each other, and the short soliloquies can make for a rather disjointed plot, as if one were listening to four radio stations at the same time. In Gerstein's light-filled, full-spread illustrations, the speech bubbles also carry the story's narrative. Thus, several squirrels awkwardly share one bubble with a text that says, " 'What a silly kitten!' laugh all the squirrels," and the entire cast shares one that reads, " ' ' shouts everyone." Gerstein ( ) cleverly includes characters who have reached different stages of "leaving the nest." Baby Squirrel is just old enough to watch the action but not to join in, and the curious kitten doesn't even know what "outside" means. The girl has left the nest but sometimes needs her mother's help, and the bluejay is too terrified to fly at first. At times the plot grows so complicated that 12 speech bubbles appear on a single spread. The format may be too confusing for novice readers, but the unfolding drama will likely hold readers' interest. Ages 3-6.